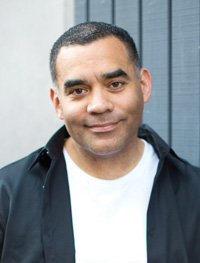 This snippet, from an interview on WGBH News with a former prostitute recalling her life at 14, spurred my new novel: “Whenever I would get into a car, some part of me hoped that this guy would see me as the child I was and I wouldn’t have to do it. But in the back of my mind I knew it wasn’t going to happen, and all I could do was hope that it was done really fast so I wouldn’t have to suffer the pain, but after a while your mind just gets numb to that feeling.”

In the course of my research for The Unrepentant, I read hundreds of interviews like this, and those voices eventually merged to create my protagonist—a young woman named Carlotta “Charlotte” Reyes. She flees a group of criminals and realizes that, to fully escape them, she needs to fight. I needed a hero, and Charlotte stormed out of me, seething, demanding a story and the chance for revenge; I gave her both. Lately, I’ve been wondering why.

In the course of my research, I spoke with a woman who worked with victims of abuse. She offered those victims counseling, a home, and safety. She and I spoke for some time about her work and about the women she helped.

“Why don’t some of the women fight back?” I asked, triggering a pause in the conversation.

“How would they do that?” she asked in response.

I didn’t have an answer. We changed the subject.

Later, I realized she was kinder in her response than she needed to be. Most crime fiction writers make an unstated but implicit decision to portray violence; each writer then makes a secondary decision on how that violence will be portrayed: bloodless or brutal, unmentioned or explicit.

And now I look at my novel, a swift punch of a book. It’s been warmly received by a nicely wide range of reviewers and readers. In many ways, I think I did right. But in other ways, I don’t know if I did right by the people who inspired me.

Writing is, of course, helplessly intertwined and sprung from the writer’s past. Vivid or subconscious experiences fill us like blood, then spill.

I’ve been fortunate not to have been in a lot of fights; fortunate because I view fights as callous and cruel and unending. I didn’t have that view until later in life, when I dated a woman who was only a few years removed from a physically and sexually abusive relationship. She found a greater sense of safety sleeping in her cramped closet than she did in her bed. Even minor acts of violence in television or film froze her. Sometimes she cried herself awake. I would listen to her stories of abuse; it seemed to comfort her to tell them—if only a little.

In high school, a boy I’d been at odds with confronted me in a restroom. We grappled for a bit on the slippery tiles, then I put him in a headlock and he gave up. He lay on the ground for a moment, then stood, fuming.

“I’m getting a gun!” he told me, and ran out of the bathroom.

This was before the days of frequent reports of school shootings. Even so, I took his threat seriously and made pains to avoid him for the rest of that year. He’d see me turn in another direction, or catch me watching him with a worried expression. And a sense of superiority would overtake his features. So I suppose, in the end, he won the fight.

There is in all of us, I think, the notion that violence will eventually find us. And when it does, it won’t be as we imagine or hope—particularly if we’re not the antagonist in that particular story. It will be faster than we expect, and unfair. And there is a great chance that, despite our best efforts, the violence we experience will irreparably shape something in the way we view the world.

This is what I’ve slowly come to realize—and it’s somewhat unsettling to realize my powerlessness, to realize that my lot as a writer is to witness, then write. I can do other things, of course, but that’s what I do best.

So that’s what I did, and I hope I did right. I hope there’s truth in how the violence I wrote is portrayed. And I hope that truth is disquieting.

E.A. Aymar’s latest thriller is The Unrepentant (Down & Out). He is a columnist for the Washington Independent Review of Books and managing editor of The Thrill Begins, and he’s on the board of International Thriller Writers.

A version of this article appeared in the 03/25/2019 issue of Publishers Weekly under the headline: Balancing Act