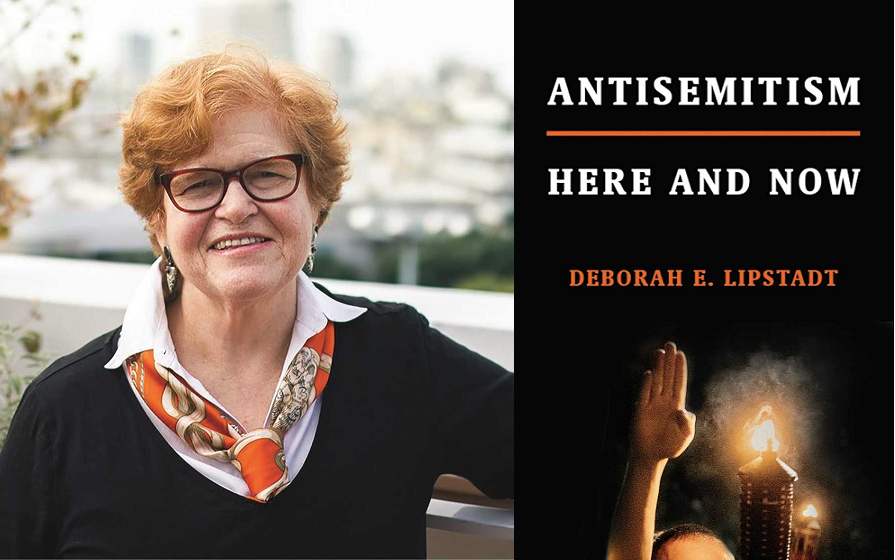 Ahead of the third Women’s March on January 19, many Jewish women struggled over whether or not to participate. That’s because Women’s March leaders have closely allied themselves with notorious anti-Semite Louis Farrakhan. It was a tough call for many progressive Jews, but it wasn’t difficult for author Deborah Lipstadt, the professor of modern Jewish history and holocaust studies at Emory University who recently urged Jewish women to “walk away from the Women’s March.” This, and other stories in the news, illustrate a steady rise in anti-Semitism on both the left and the right. In her new book, Antisemitism: Here and Now (Schocken, Feb. 2019), Lipstadt draws on history to analyze the increased hostility of today.

Despite current events, anti-Semitism is baffling to many people, both in how it manifests itself and among those who just don’t see it. For example, it is very easy to see blatant anti-Semitism in, say, the Charlottesville neo-Nazi rally, or the Pittsburgh synagogue shooter. But not everybody sees the Women’s March leaders as anti-Semitic, or author Alice Walker, who has also come under fire for alleged anti-Semitism. There are questions about what constitutes anti-Semitism that many Jews and non-Jews have and they go deeper and wider than any single news event. In addition to those questions, Lipstadt explores why Jews are among the only minorities who are not believed when they say they see anti-Semitism. It’s a perplexing problem, and one reason why she chose to explain the phenomenon in the form of fictional letters to her from Jews and non-Jews.

“I started to write it as a straight narrative history kind of thing first and it was so boring I was falling asleep writing it,” Lipstadt said. Then, at the suggestion of a colleague, she rewrote it in letter form, based on actual questions the Emory University Holocaust scholar has been asked. “I realized that letters was a way of a taking a topic bit by bit and personalizing it.”

It was not only a good way of tackling the nuances of how and when to recognize, say, anti-Semitism masquerading as anti-Zionism vs. legitimate criticism of Israeli policy, but also get at questions of the origins of anti-Semitism and why it seems to be in resurgence.

First, the origins. Her book calls anti-Semitism the most-ancient of conspiracy theories, one that defines Jews as a power far beyond their real numbers. She compares prejudice toward Jews to a comment made by an African American colleague, who said a white person can’t grow up in Western society without absorbing racism. “I think in the same way, much of Western society has absorbed anti-Semitism,” she said.

“If someone were to say to you, ‘The stock market crashed, it’s because the left-handed people got a hold of the powers of the market and manipulated it,’ you say to them, ‘We’re taking you to the psychiatrist right now,’” Lipstadt said. “But if they say to you it was a group of Jews and they were doing this to benefit Israel, you say, ‘Well maybe there’s something to it.’”

This is the way ancient conspiracy theories about Jews have “metastasized” in the culture, the author said. Why, then, is anti-Semitism becoming more pronounced now? Continuing the medical analogy, but apologizing for its crudeness, Lipstadt likens anti-Semitism to the herpes virus.

The best way to fight it, she said, is another ancient weapon: facts. They won’t necessarily convince anti-Semites that their views are wrong, but it will help with confusion. “You have to do your homework,” Lipstadt said. “Righteous indignation is good, but righteous indignation is far better when it comes with facts and with information.”