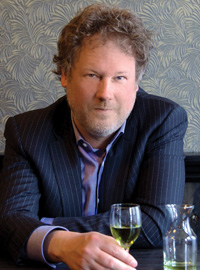 What inspired you to write Hungry?

Every now and then a figure comes along—in film, music, art—who’s a supernova, someone with incredible ideas and influence and energy, and René was one of those people. I had access to him at a pivotal moment, when he decided to close the original Noma and build the new one on what looked like a waste dump. I felt like: This can’t be replicated. These scenes can’t happen again. They’ll vanish into history if they aren’t captured.

You depict Redzepi’s drive for constant personal and creative reinvention. Why do you think he has been able to stay relevant in the culinary scene?

He keeps the conversation going. He has a compulsion to continue moving forward, and that is advantageous for the restaurant. That’s how René is wired. He would be changing the restaurant incessantly even if he were unknown.

Do you think Noma’s fixation on hyperlocal sourcing is a trend, or a longer-lasting movement in the world of fine dining?

He has intensified a conversation that has been happening for decades. His focus on change and forward movement is in sync with the way nature works. When you speak with the Noma team about foraging, fermentation, the oceans, and soil, you come to a deeper understanding of the beauty of the world and what we have to eat. And you can’t help but want to protect that.

Was traveling with the high-energy chef ever “too much”?

To be around René Redzepi is intoxicating. But sure, sometimes it’s too much. If you enter a marketplace in Mexico, if you’re walking through a field in Scandinavia, if you’re at the shoreline of an ocean, he’s analyzing it. He’s telling you what’s edible. He’s telling you about the history, the topography. He’s telling you about all the foraged edibles you can pluck. He’s a reporter’s dream spouting off brilliant, quotable insights. But, after a few days, you want to go away and process it. I think René is aware of that.

What was the best thing you ate with Redzepi?

The best thing that I ate at Noma, the dish that haunted me, was fresh sea urchin from Norway pulled up from the ocean that morning, served with hazelnut milk, shavings of raw hazelnut, and sea salt. But the best meal I had with René was in a Mayan village where we got cochinita pibil, a traditional pork dish cooked in a hole in the ground. Women of the village made exquisite, scrumptious tortillas. René and I were swooning. It was a beautiful village, beautiful people, the most delicious food.

A version of this article appeared in the 03/25/2019 issue of Publishers Weekly under the headline: In Search of Flavor