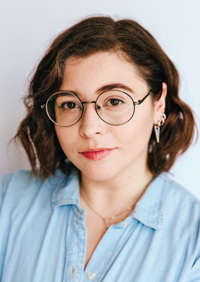 How did you conceive of these characters and create this particular plot?

It was 2016, and I was following the election closely. I read a dry Carl Bernstein biography of Hillary Rodham Clinton and I was obsessed with the first family details. I had two ideas at the same time: a rebellious First Kid, and a misunderstood Prince Charming. I thought, what if I could combine them in the same story?

I’m from Louisiana, and very left-leaning politically. I am so defensive of people writing off Democrats from the “red states.” I feel that’s an underexplored narrative—people from the South and red states are progressive. I watched the Wendy Davis filibuster, and I was crying. I was so moved by what she did. That inspired the character of President Ellen Claremont. I didn’t intend it to be a response to Trump; I expected the election to go a different way. Suddenly, it had to serve a bigger purpose. I wanted an antidote to all the negativity and what feels terrible about politics in this country. I wanted to hearken back to the sense of hope I had when I was a junior in high school, when Obama got elected.

What research did you do?

For the White House, that Carl Bernstein Clinton biography. I did Wikipedia reading—I shouldn’t admit that as a journalist. I watched a lot of Veep, which I know is fiction, but it’s more accurate than The West Wing. I read WhiteHouseMuseum.org, which has free historical info. They came through for me. For the U.K., I can’t tell you how many articles I read. I went on the Victoria and Albert Museum website, looking through the royal collection for a throwaway joke. The royal box at Wimbledon was hard to research—the royal family moves in secrecy—so I watched some shady Youtube videos.

How explicit did you feel you could get with the romance?

It was more explicit when I first wrote it because I didn’t think it would ever get published. I am a queer person, and I gravitated to this story because I write queer romantic comedies. I felt it was important to do what any other romance would do. Queer sex isn’t more explicit than straight sex. I thought it would be irresponsible to tone it down. Then I got an agent and a deal, and I didn’t want to alienate a young adult, 17-year-old reader. So it became, what level am I comfortable having my name attached to? It’s a fine line. I was mindful of it. But I wanted no sex scene to feel gratuitous. It had to have a purpose and move the relationship along.

A version of this article appeared in the 03/25/2019 issue of Publishers Weekly under the headline: Making Politics Loving Again