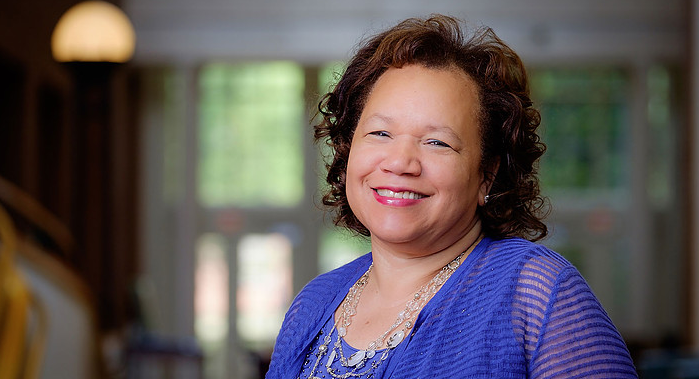 Congratulations to Wanda Brown, director of library services at the C. G. O’Kelly Library, Winston-Salem (N.C.) State University, and your next ALA president. In the election, which closed April 4, Brown received 6,066 votes, while her opponent, Peter Hepburn, head librarian of College of the Canyons, Santa Clarita, California, received 4,066 votes.

“It is truly an honor to be elected as the next ALA president,” Brown said in a statement. “I thank you for the opportunity to lead. I look forward to working closely with the membership in advocating for libraries, fostering diversity and inclusion, and demonstrating our profession’s value.”

An ALA member for 30 years, Brown is an active member of a number of library organizations, including the Association of College and Research Libraries, the Association for Library Collections and Technical Services, and the Library Leadership and Management Association. She has held multiple leadership positions within each division.

She will serve as president-elect beginning with the 2019 ALA Annual Conference in New Orleans, where Loida Garcia-Febo will be sworn in as the 2018-2019 ALA president.

Despite a nearly 2-1 margin in favor, a ballot measure that would have required the ALA’s next executive director to hold an ALA-accredited master’s degree failed, as it failed to meet the 25% threshold of eligible ALA members required in order to carry the amendment forward.

The vote came after the ALA Council last fall voted (with 77% support) to make the MLS degree preferred, after the initial search for Keith Feils’s permanent replacement failed to turn up a suitable candidate. In response, a minority of ALA members successfully circulated a petition to place the MLS question on the ALA’s spring ballot, seeking to keep the ALA executive director position MLS-required.

The issue became a divisive, hotly debated issue within ALA, as it has stalled the search for a new executive director. Keith Fiels officially retired last July. But now, the voters have been heard. And while a large majority of voters sought to keep the job MLS-required, 79% of ALA members simply didn’t care enough to even vote.

The good news is: the ALA Executive Board can now proceed with the search process again.

On Monday, the American Library Association released its 2018 State of Libraries report. While public support for libraries is on the rise, 2017 saw an increase in the number of attempts to remove or restrict access to library materials.

According to the report, 416 books were challenged in 2017. The “Top 10 Most Challenged Books of 2017″ included many familiar names in the children’s book world. Jay Asher’s Thirteen Reasons Why, which was adapted into a Netflix TV series in 2017, rose to the top of the list a decade after its publication, followed by The Absolutely True Diary of a Part-Time Indian, by Sherman Alexie, which has consistently made the list since its publication in 2007.

As PW’s John Maher reported earlier this week, the data from which the list was compiled shows the books were challenged “for reasons irrespective of the allegations” surrounding authors, both of whom in recent months have been accused of—and respectively denied in some capacity—sexual and professional harassment. Still, their presence on the list brings new light to the role of censorship today.

“The Office of Intellectual Freedom believes no idea, no story should be forbidden or censored just because of what it says,” OIF director Jamie LaRue told PW. He noted that the issue is “part of a larger swell of concern,” which, he says, is part of “the real conflict right now in our society, and certainly in librarianship, between intellectual freedom and social justice.”

The report also announced the theme of 2018’s Banned Book Week—“Banning books silences stories. Speak out!”–– which is scheduled for September 23–29. The new theme aims to highlight challenges to intellectual freedom beyond books and the ways people are silenced in everyday life, including instances such as when authors Colson Whitehead and Andrew Aydin were invited and then disinvited to speaking events, as well as the impact of 23 hates crimes in libraries reported in 2017.

A national survey on voter perceptions and support of public libraries finds that libraries are increasingly seen as community hubs for human connection and lifelong learning.

Over at TPM, a great analysis by Josh Marshall: Data Lords: The Real Story of Big Data, Facebook and the Future of News…

Media studies scholar Siva Vaidhynathan nails it: “the core problems with Facebook are that it has 2.2 billion users, and an algorithm that amplifies nonsense…”

New York Times tech columnist Brian Chen: “I Downloaded the information that Facebook has on me. Yikes.”

According to Pew, an estimated two-thirds of tweeted links to popular websites are posted by automated accounts, not human beings.

For the first time in two decades, a huge number of books, films, and other works will escape U.S. copyright law.

From Forbes, How Libraries Are Reinventing Themselves To Fight Fake News.

With broad new injunction, publishers and Sci-Hub ramp up their game of “whac-a-mole.”

Vox discovers that there is a longstanding and vicious feud between architects and librarians.

Don’t call me a customer, treat me like a human: a public policy professor asks us to rethink relationships in public service.

50 years and nine editions later, the seminal women’s health book Our Bodies, Our Selves is going out of print.

A murder in the library via CrimeReads.

Dan Rather: “Libraries represent an aspirational notion of democracy.”