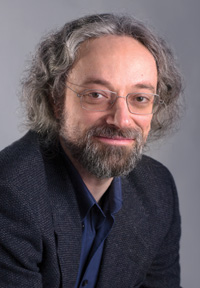 In Einstein’s War (Dutton, May), Stanley discusses how, during WWI, Einstein and his theory of general relativity came under suspicion, both in his native Germany for his antiwar ideals and in Britain for his German citizenship.

How has this book changed over the two decades that you’ve been working on it?

It started as a fairly dry history of ideas—who thought of what, when. But I gradually realized how important the social, political, and cultural aspects of the story were. You can’t tell the story of relativity without including pacifism and nationalism; you can’t understand how Einstein became the icon of genius without talking about the British boycott of German science.

Can you expand on your statement that “how we think about science, how we link it to the other parts of our lives, changes the way science is done”?

No one is surprised to hear that the personal experiences and beliefs of an artist or musician affects their work. But people are often uncomfortable thinking about the same thing happening with scientists. Scientists, though, are just as human as any artist. They have to make decisions about what topics to study, how to approach those problems, who to work with, and how to justify their conclusions. The story of relativity shows how dependent science is on personal choices and personalities—if Archduke Ferdinand had had a better driver, or if Einstein hadn’t made friends with some Dutch scientists, relativity would be completely different.

How else is science misunderstood?

Science is not a plodding, purely rational step-by-step process—it is a dynamic, human enterprise that is deeply reliant on politics, religion, creativity, and friendship. A standard way of justifying the importance and power of science is to claim that it is completely different from other human endeavors. If we imagine that science is purely objective, then it gains a privileged position in our society. Science really does help us understand the world and produce amazing achievements, but it requires creativity and personal connections along with rational analysis and mathematics. Scientists aren’t any less human than the rest of us; the trick is to understand how that humanity is essential to the way science works.

How does that connect to the current atmosphere of hostility to science in certain quarters?

When people are taught that science is perfect and always objective, and then they see that it is not, their confidence in the whole enterprise is threatened. Insisting on scientific certainty creates a kind of fragility—it is not hard to see that scientists are human and act like it, and if that is not what you expect, then your ideals will be easily shaken. We are better off with an accurate picture of science, even if that sacrifices some of its authority as transcendental truth.

A version of this article appeared in the 03/25/2019 issue of Publishers Weekly under the headline: Only Human