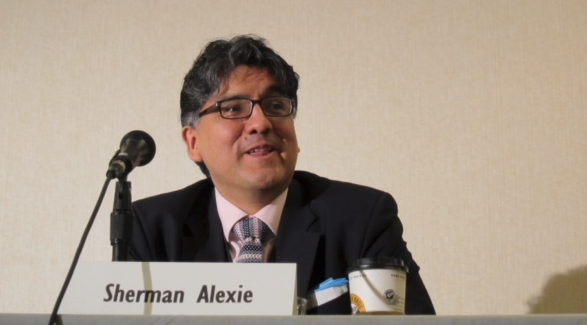 Last weekend, news broke that Sherman Alexie, amid a growing number of allegations of sexual misconduct, had declined the American Library Association’s 2018 Andrew Carnegie Medal for Excellence in Nonfiction. Alexie was announced as the winner of the literary award on February 11, at the 2018 ALA Midwinter Meeting in Denver, for his book You Don’t Have to Say You Love Me: A Memoir.

In a statement, ALA officials said they have acknowledged the author’s decision, “and will not award the Carnegie nonfiction medal in 2018.”

Surely, Alexie’s decision relieved ALA officials from having to make a very tough call: whether or not to invite the author to the awards reception this summer. Carnegie winners typically address librarians and accept their medals at a reception at the ALA Annual Conference, (which this year is set for June 21–25 in New Orleans). Now in their seventh year, The ALA’s Carnegie Medals have become a coveted literary prize, and the awards reception has become known for great speeches.

But, questions remain. For example, what exactly does ALA mean by “will not award” the Carnegie nonfiction medal for 2018? Because, in fact, Alexie has already won the award, has he not? Will he remain listed as the 2018 winner, with a footnote perhaps? Or, will ALA going forward choose to list “no winner” for the 2018 nonfiction medal? If so, then hasn’t ALA more accurately rescinded the award?

It matters. So far, ALA seems eager to steer clear of controversy here, understandably. But whether or not Alexie picks up his medal and cashes the check is not the point. Is ALA in fact rescinding the award? Should they rescind the award? And isn’t this a discussion worth having?

By declining the award Alexie took ALA off the hook for having to make a thorny decision, but ALA shouldn’t be so eager to run from this episode, or sweep it aside. And my hope is that at this year’s Carnegie Awards reception and beyond, ALA sees this episode as a chance to elevate a much-needed conversation about how to navigate this powerful cultural movement.

Last week to mark the occasion of women’s history month, the New York Times launched “Overlooked,” a new feature which aims to rewrite history by publishing the obituaries of women whose remarkable lives were overlooked by editors at the time of their deaths.

And on Monday, National Geographic followed suit with the publication of their April issue, “The Race Issue,” which coincides with the 50th anniversary of Martin Luther King Jr.’s assassination. Editor Susan Goldberg set the tone in her editor’s note, which appeared under the bold headline of “For Decades, Our Coverage was Racist. To Rise Above Our Past, We Must Acknowledge It.” In it, she draws on the expertise of historian John Edwin Mason to examine the National Geographic’s fraught coverage of race over the years.

“What Mason found in short was that until the 1970s National Geographic all but ignored people of color who lived in the United States, rarely acknowledging them beyond laborers or domestic workers. Meanwhile it pictured ‘natives’ elsewhere as exotics, famously and frequently unclothed, happy hunters, noble savages—every type of cliché,” Goldberg wrote.

The fact that two media organizations — storied journalistic institutions at that—are so openly grappling with their histories is at once remarkable and long overdue. It marks a turning point in the world of journalism, which while being preoccupied with notions of objectivity in day-to-day coverage, has largely failed to redress its own institutional biases.

What’s also interesting is how different the two approaches are. As Twitter user Katherine Maher (who happens to be the executive director of the Wikimedia foundation) points out, the tone of the New York Times article was more of a shrug while National Geographic’s was overtly critical of itself.

She has a point. However, its also important to note that the Times’s feature is ongoing and it aims to fill the gaps of its coverage, using input from its current readers. National Geographic’s addresses the issue head on by devoting an entire issue to it.

A report this week from Inside Higher Ed said than more than 350 individuals and organizations have signed a statement in support of Chris Bourg, Massachusetts Institute of Technology Libraries director, after she was targeted on social media.

The harassment began after Bourg gave a keynote speech at the Code4Lib conference last month in which she spoke about “the importance of diversity” in software development.

In a statement, the Association of Research Libraries said such “vicious attacks, such as those leveled at Chris Bourg or any member of the research library community, will not silence the community’s voice nor stop its efforts.”

California became the latest state to advance a Net Neutrality bill this week, which Fast Company calls “the most detailed state internet-access bill in the country.”

The ALA Washington Office this week is catching flak for honoring California Congressman Darrell Issa.

Public libraries are are invited to participate in a programming opportunity around The Great American Read, an eight-part PBS series designed to spark a national conversation about reading and the books that have inspired, moved, and shaped us.

Governor Kate Brown removed state librarian MaryKay Dahlgreen on Tuesday in a move that the Oregonian says surprised and angered many librarians and library supporters around Oregon.”

A new Florida law would allow school librarians to carry guns, librarians say no thanks.

In an interview on Tuesday with Wired editor Nicholas Thompson, YouTube CEO Susan Wojcicki said that YouTube these days is “really more like a library.” And librarians aren’t having it…

WIkipedia says it has no formal relationship with YouTube, but, sure, go ahead, use us…

Roxane Gay shares her 10 Favorite Books with the website Vulture …

The Internet Archive wants your help building a great digital library…and it has a wishlist.

Library Journal has released its 2018 list of Movers & Shakers. Congratulations to those honored!