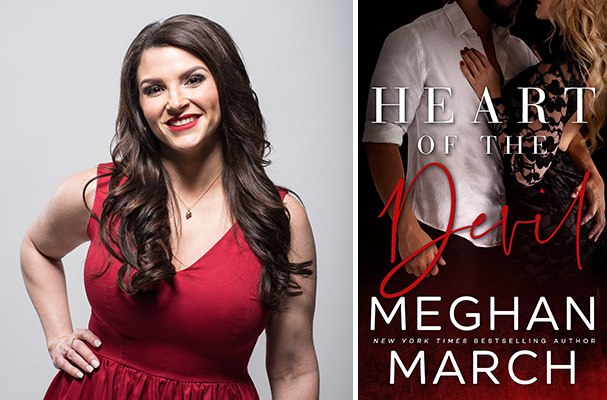 During the eight years Meghan March worked as a corporate lawyer, handling mergers and acquisitions, she sought refuge in reading and writing romance. She’d never thought seriously about becoming a full-time author, but, while looking for a new professional path, she told her career coach that she was working on a book. Her coach set her a deadline, and the challenge lit a fire.

“After that, I was hooked,” March says. “Story ideas flowed constantly, and I knew that becoming a full-time author was my new goal.”

About 18 months after March self-published her first book, 2014’s Flash Bang—which her media manager, Donna Soluri, describes as “a postapocalyptic ménage romance”—she quit her corporate job and, she says, “never looked back.”

For March’s ravenous fans, it’s a good thing she didn’t. She followed Flash Bang with the first book in her popular Beneath series: Beneath the Mask (2014). To date, she has published more than 30 titles and sold millions of copies in multiple languages. March writes across several series, including the Beneath and Dirty Girl books and the Dirty Billionaire, Forge, Mount, Savage, and Sin trilogies. She also has a number of standalone novels.

March says her characters bring the real spice to her storytelling and are the ingredient that lies at the heart of any great romance. “A good portion of my characters storm into my brain fully developed on impact,” she says. “Many times, it feels like they’re already real and have just been waiting for the perfect moment to introduce themselves to me so they can start demanding I write their story.”

Other characters first come to March as questions. For example, she says, “What if there was a woman who wanted to run away from her life?” From there, she asks more and more questions, until a character begins to emerge. “I focus on creating intriguing, multifaceted, and layered characters. Readers find it easy to connect with them because they’re flawed and human. And then I put them through hell.”

Though that may sound cruel, March believes that her characters come alive through challenge and perseverance. “No happy ending can be as sweet as the one two beloved characters must fight to achieve,” she says. “The more intense the struggle, the more memorable the novel.”

March says that “writing the absolute best books possible is always my number-one strategy for success,” but she adds that she has learned, through some intense trial and error, a few best practices for promoting her books. She focuses on making connections with readers through social media and Amazon Marketing Services ads, but feels that real-world interactions with readers and word-of-mouth advertising are critical to her success.

March notes that she relies on the support of “an awesome community of super fans” to spread book-related news. In turn, she listens to and nurtures her fan base: “I value each and every one of my readers, because they’ve made this journey possible.” Beyond smartly using available marketing tools, she says she finds that “my genuine excitement about what I’m writing is one of the best tools for promotion.”

March encourages writers who are considering self-publishing their work to tap into their business savvy by putting on their CEO hats and embarking on the journey with a well-stocked arsenal of “grit and determination.” It’s not the right path for everyone, but, for March, the sweetness of success is well worth the fight.

A version of this article appeared in the 03/25/2019 issue of Publishers Weekly under the headline: True Romance